BACK TO THE FARM: WAY OUT OF RECESSION 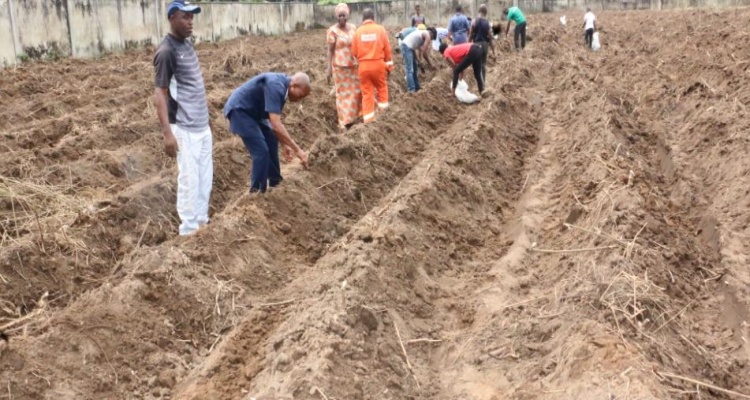 Akwa Ibom State clocked 29 last September. Amidst the drumbeats that heralded the anniversary were also sighs and groans resonating from different sections of the state over the crushing blow of the current wind of recession blowing across Nigeria. To mitigate the impact of the drought and ensure citizens of the state enjoy abundance, the Governor, Mr. Udom Gabriel Emmanuel has found a way out in farming for self-sufficiency. As part of his DAKKADA vision, he has urged the citizens to take to farming to buffer the effect of current recession.

As a state which has depended wholly on oil, the governor is now charting diversification into agriculture and tourism as alternative revenue earners for the state. In his commitment to ensure food sufficiency for the citizenry, the Governor has set up three Garri processing plants.  His word: "God has a purpose in the affairs of this country because the recession has challenged all to diversify investments to agriculture, tourism, solid mineral and non-oil sectors of the economy for employment generation, wealth creation, food sufficiency and sustainability." The Governor further added: "This administration is committed to providing a value chain in agro - businesses to enable farmers derive commensurate returns for their investment.” Speaking in the same vein, the Undershepherd of All Nations Christian Ministry Int'l, Eket, Pastor Umo Eno, has urged the citizenry to return to farming as an alternative revenue earner.  In a message titled, 'It's Time to Go Back to Farm,' Pastor Umo Eno who is also the Governor / CEO of Royalty Group charged the audience to embrace agriculture. He stressed that he was mobilizing the congregation to invest in agriculture so that within a year, bags of branded ‘All Nations Garri’ would flood the market at reduced prices. The church, he said has acquired over three hectares of fenced arable land earmarked for large scale farming project of the Ministry.  The goal of the project is to create employment opportunities for the communities, ensure food sufficiency.

Pastor Umo Eno praised the Governor of Akwa Ibom State, Mr. Udom Emmanuel for the DAKKADA vision; acknowledging that the vision of the State Governor was well designed for this time. He advised Akwa Ibom people not to reduce the DAKKADA vision into a mere creed but integrate its basic principles for outstanding accomplishment in the face of economic downturn in the country. He recalled that when recession hit Egypt at the time of Joseph, agriculture was what was used by Joseph to salvage the bad economy. He has set up a technical committee with technical input from Akwa Ibom State Agriculture Development Programme (AKADEP) to commence work on the farm project. When this writer visited the farm, planting of cassava was in progress. First harvest from the farm is expected next August. Meanwhile, Pastor Umo Eno has assured the Committee of full support to realize the vision of the project.

BACK TO THE FARM: WAY OUT OF RECESSION

NOW YOU CAN STAY, DINE AND RECREATE IN EKET